Although the sales of new vehicles hit a five-year peak in 2012, automotive advertising at newspapers was on track at year’s end to decline for the ninth straight year – and likely headed to the lowest level since 1979. 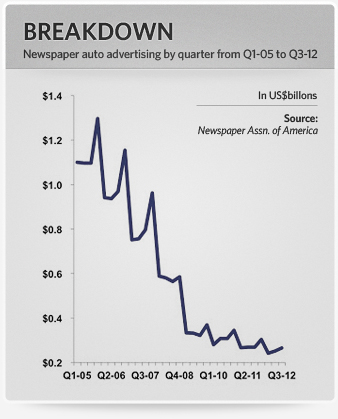 The continuing slump in auto advertising at newspapers, which has persisted in spite of a healthy rebound that powered new vehicle sales to 14.5 million units in 2012, is perhaps one of the best examples of how technology irrevocably has changed the behaviors of both buyers and sellers in what once was one of the most significant and reliable categories for publishers.

As we will see in a moment, the new dynamics of the marketplace make it highly unlikely that auto advertising, which once reliably tracked the ups and downs in the economy, will return to its former prominence for newspapers.  First, the numbers:

In the third quarter of this year, auto classified slipped by 0.9% to $255.5 million, according to the Newspaper Association of America, an industry-funded trade group.  In the same period, vehicle advertising by auto makers across all national media – print, broadcast, Internet and outdoor – surged 26% to $2.7 billion, according to the Nielsen marketing-information service.  Beyond the advertising bought by the factories, Nielsen said local dealers boosted their spending by 22% to $1 billion.  Thus, newspapers captured less than 7% of auto advertising in the three-month period.

The feeble newspaper auto sales in the third quarter of last year contrast with the $1.1 billion of vehicle advertising sold in the same period in 2005, the last year before publishing revenues began a catastrophic tumble  that has cut the industry’s aggregate ad revenues by more than half.   Thus, as illustrated in the chart below, publishers have lost three-quarters of their ad volume in this key vertical in just seven years.

The once-powerful partnership between auto dealers and publishers has collapsed because consumers for the better part of the last decade have moved to shopping for cars on highly optimized digital sites, rather than in print.

Well aware of the ability of consumers to compare models, read ratings, peruse inventories and negotiate terms while still in their pajamas, both dealers and manufacturers are shifting ever-greater portions of their marketing budgets to the digital media in the interests of intercepting potential customers early in the decision-making process.

The exodus of auto advertising from newspapers began well before the onset of the Great Recession in late 2007.  After peaking at an all-time high of $5.2 billion in 2003, auto advertising began falling in 2004 – a good four years ahead of the recession – and has continued to slide ever since.

The trend in the first nine months of this year suggests newspapers collectively will sell approximately $1 billion in vehicle advertising for all of 2012 – or less than 20% of the volume achieved in 2003. Assuming the projection is accurate, this will bring the industry’s auto sales to the lowest level since 1979, according to records maintained by the NAA.

Back in 2003, auto advertising delivered a significant 11.6% of industry revenues for publishers. This year, my projections show vehicle advertising will generate no better than 5% of total print sales. (The NAA does not detail the sources of online revenues in its reports, but Jim Conaghan, the trade group’s research chief, noted in an interview that 15% of the industry’s total revenues come from digital advertising.)

The secular shift in the way consumers buy cars is detailed in a comprehensive new report from AIM Group, a research and consulting firm formerly known as Classified Intelligence. The report, which is available here, costs $795.

The reason auto sellers are forsaking newspapers is that “most buyers made vehicle and dealer decisions before stepping foot in any showroom,” said AIM in the report. “Then, 40% went straight to their chosen dealership and bought.”

In addition to visiting such pure-play sites as Auto Trader, Kelley Blue Book, Edmunds, eBay and Cars.Com, AIM said consumers also shop and share information on eBay, Facebook and Craig’s List.   Cars.Com is owned by A. H. Belo, Gannett, McClatchy, Tribune Co. and Washington Post Co., a quintet of newspaper publishers who were wise enough to hedge their bets by investing in what has become one of the top pure-play sites.

Instead of kicking tires at car dealers on Saturday morning, consumers today “talk pre-sale with dealers by email, live chat, text and social media,” said AIM.  Noting that 15% of consumers are shopping for cars on mobile devices and many shoppers also are comparing models among themselves on the social media, Jim Townsend, the editor of the AIM report, said “social-mobile” services will further transform the way buyers and sellers interact.

“If you think about what your customers already are doing with their phones and tablets, you really can’t afford to ignore the trend of social-mobile,” said Townsend.  “Incorporating social-media tools like Facebook, user reviews and social sharing of information into auto advertising is the direction every publisher needs to go.”