Years of negative reports on ad revenue losses could leave the newspaper industry muttering, “I demand a recount.” The Newspaper Association of America has just completed such an exercise and found some solid gains that have been overlooked previously in its own measurements. 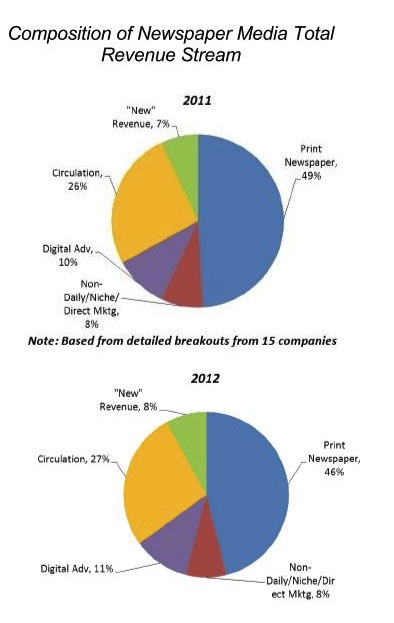 The new statistics are based on a survey of 17 companies, representing about 40 percent of industry circulation and 50 percent of revenues.  Because this is a different and slightly larger group of companies reporting results, there are small discrepancies with NAA’s previous estimates of advertising and circulation.

The big growth areas — digital marketing services and circulation revenues — are likely to continue their momentum through 2013.  Many prominent companies like Gannett and McClatchy switched to digital paywalls and print-plus-digital bundles midyear in 2012.  They will gain more revenue by having those plans in place for the full year in 2013.  Other companies like Scripps and the Washington Post are just starting digital subscriptions this year.

Some of the revenue activities are so new that companies themselves have not been measuring them separately. For example only nine of the 17 reported figures for digital agency and marketing consulting services in which newspapers provide guidance to local businesses in developing their web and mobile presence and using social media. Only seven of the 17 reported event marketing as a separate revenue category and three reported commissions on direct sales through e-commerce.

On the other hand, the report takes in other revenue activities that have been developed gradually over the last decade and were flat or slightly down for the year:  commercial printing, distribution of national newspapers and other material, niche publication, direct mail and related weeklies.

These statistics did not seek to measure other enterprises owned by some of the larger companies or any international operations.

Some other findings of note:

In the interest of full disclosure, I need to say that I was among the instigators for this broader measure of the industry’s revenues.  A year ago my colleagues and the Pew Research Center and I gave prominent play in the State of the News Media report to the statistic that the ratio of print as losses to digital ad gains in 2011 was 10 to 1. It got even worse last year, at 16 to 1.

But there were already signs that the industry had been growing some newer activities and that a full measure of “other” would provide a less gloomy balance of revenue gains and losses.  Pew’s Tom Rosenstiel moved to become executive director of the NAA’s American Press Institute at the start of this year. In that position, he also oversees the association research and statistics and asked companies for the more detailed and comprehensive revenue data.

These measures are new enough that the results may be slightly less exact than the traditional categories that NAA has measured for decades.  On the plus side, they establish a new basbaseline against which gains and losses in year to come can be identified.

I have earlier noted that as the industry responds to investor demands for stabilizing and growing revenues, the next question may be the profitability of these activities compared to its still shrinking base of print advertising.  An extra dollar of print advertising is nearly pure profit, while the new digital subscriptions are expensive to market. Commercial printing is highly competitive and operates on tight margins.

Still, today’s results show the industry doing considerably better than the doomsters say, with at least a chance to turn total revenues positive this year or in 2014. That will not happen, however, if the shift from print advertising to an array of digital marketing options accelerates.