A series of changes in recent years in the way newspapers count their subscribers masks a deep, ongoing and troubling plunge that has cut print circulation by 41.6% at the nation’s biggest papers since 2005.
Print matters because it still produces approximately three-quarters of the revenues at the typical newspaper, according to Jim Conaghan, the vice president of research at the Newspaper Association of America, an industry-funded trade group.

Although most publishers say they are moving aggressively to diversify their revenues away from print by creating digital products and services, the typical newspaper depends on print advertising and circulation fees to not only fund the innovations they hope will secure the future of their franchises but also to stay afloat in the meantime.

The foremost question facing publishers is whether the traditional print business will remain robust long enough to support a successful pivot to the digital delivery of news, information, advertising and other commercial services. But an analysis of the most recent circulation data shows that print circulation is shrinking at an alarming rate. Here are the details: 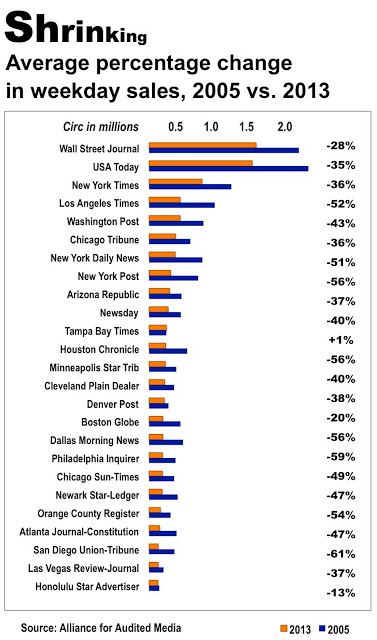 While the Alliance for Audited Media reported Tuesday that combined print and digital circulation at newspapers in the last six months fell by 0.7% on weekdays, print-only circulation actually declined by 9.9% in the same period at the 25 largest papers in the country. The AAM is an industry-funded group formerly known as the Audit Bureau of Circulations.

The long-term circulation trend is sobering. The AAM archives show that weekday print circulation at the top 25 papers has plunged 41.6% since March, 2005, the year the industry achieved all-time high advertising sales of $49.4 billion. In a stunning reversal of fortune that has roiled the industry ever since, ad sales in 2006 commenced a seven-year slide that brought aggregate industry revenues to $22.3 billion by the end of 2012.

As illustrated below, weekday print circulation in the last seven years has fallen by more than half at the Los Angeles Times, New York Daily News, New York Post, Arizona Republic, Houston Chronicle, Boston Globe, Dallas Morning News, Newark Star-Ledger, Orange Country Register, Atlanta Journal-Constitution and San Diego Union-Tribune.  Only one of the 25 papers on the list reported selling more print copies in 2013 than in 2005: The Tampa Bay Times.

In fairness, some of the circulation decline results from decisions by publishers to stop selling promotional subscriptions at heavy discounts and to discontinue the costly practice of shipping papers to locales outside their primary markets. It also is fair to note that circulation may have been more stable in the last seven years in small- and medium-sized markets than among the metros on the list of the top 25 properties.

At the same time circulation has been contracting, it has become increasingly difficult to track the trends, because the previously simple and uniform metrics employed by publishers have been replaced in recent years by a series of complex rules that now make it possible for publishers to include far more products than paid print papers in their circulation tallies.  In addition to paid print newspapers, publishers today can count digital subscriptions and even free products that deliver preprint advertising to the homes of consumers who don’t happen to buy the newspaper.

The positive side of the new rules is that they allow publishers to fully portray the breadth of their audiences, as they endeavor to make their content available in free print products, on the web, on mobile platforms and in the social media. But the flip side of the latitude afforded publishers is that the new methodology can lead to incongruous, if not to say unbelievable, outcomes.

In one example, the new rules make it possible for the Chicago Sun-Times to appear to be larger than the Chicago Tribune, which unquestionably dominates the market in which they both compete.  Here’s how that can happen, based on the AAM data published here:

By counting digital subscriptions and give-away products in conformance with the rules that publishers have adopted for themselves at the AAM, the Sun-Times claimed total weekday circulation of 470,548 in the six-month period ended on March 31 vs. the Tribune’s 414,930. But…

When it comes to selling the print newspapers that generate the bulk of advertising and circulation revenues, the Tribune swamped the Sun-Times with weekday circulation of 368,145 vs. 184,801.  On Sunday, the day of the week that typically generates 50% or more of a newspaper’s revenues and profits, the Tribune’s average circulation was 706,840 papers a week vs. 186,182 for the Sun-Times. Which paper looks bigger now?

A close look at the data shows the Sun-Times pulled ahead of the Tribune by legitimately counting the 208,087 newspapers in publishes in suburbs around Chicago. But the Tribune, which publishes hundreds of thousands of sister titles of its own, does not include their circulation in its publisher statement. The disparity in reporting practices forces an advertiser to parse through the conflicting data to understand the dynamics of the market. Is confusion the outcome the industry desires?

Among the other anomalies on the list of the 25 largest papers published by AAM, the Honolulu Star-Advertiser, which has a print circulation of 125,726, is listed as being larger than the San Diego Union-Tribune (print circ: 192,782), Boston Globe (print circ: 172,048) and Atlanta Journal-Constitution (print circ: 149,523).  Once again, the question arises:  What is the relative value of the products that put the Honolulu paper ahead of the papers in the much larger markets?

Because there is no unanimity in the way publishers report circulation, some newspapers  can count the same individual twice if her print subscription is bundled with digital access.  How can an advertiser tell if someone is double-counted?

In the future, as noted here by Rick Edmonds at the Poynter Institute, publishers will have even more latitude in counting noses by cherry-picking the days of the week they report circulation. Will increasingly idiosyncratic circulation data help – or turn off – advertisers?

With print circulation flagging and digital products evolving, it is understandable why publishers want – and need – flexibility in the way they report the size and nature of their audiences to advertisers.

But the anything-goes approach to circulation metrics – which raises more questions than they answer – seems to be a counterproductive path to achieving the objective.

If credibility is a critical factor in building confidence among advertisers, why is the industry producing such confounding data?