Over half of the global adult population is set to own a smartphone by the end of 2015. That billions-strong audience is both a huge opportunity for publishers and a big challenge. You can reach more people than ever before for more of the time, but it’s harder to make money from those people on smartphones than it is in print or even on desktops or laptops.

That’s the global figure, and the penetration in Western territories is much greater. Statista and Kantar research shows 71 percent of UK consumers have a smartphone, and that figure rises to 75 percent in the US.

Smartphones are well on their way to becoming the dominant end-point for digital publishing. But publishing to smartphones throws up some interesting challenges. Here we’ve highlighted some key stats and trends showing what the smartphone market looks like as we head into 2015 and beyond, and what that means for the publishers that are trying to reach people on those devices:

While that’s a way off, it does mean smartphones are going to become central to publishers’ digital strategies: More people than ever before are choosing to consume news content primarily on mobile devices, with the Reuters Digital News Report 2014 demonstrating across the board increases in people seeking out news content on their mobile devices.

And that’s having an impact on access via other devices. Reuters claims:

«The overall number using a computer to access news each week has slipped from 73 percent to 67 percent.»

That shift – and the uncertainty of how to make money from mobile – has led to some commentators saying news consumption on smartphones could be just as disruptive to publishers’ digital strategies as the internet was for their print strategies.

That’s distinctly possible, especially given what we know about how audiences are choosing to spend their time on connected devices…

2014 was the first year in which more time online was spent in mobile apps than on desktops, and mobile web barely got a look-in. That’s not the case for news consumption, but publishers should take note of those proportions are underscored by an increase in the time spent in-app for news applications, which analysts Localytics showed rose 14 percent over the past year.

While mobile responsive websites are likely to remain a priority for publishers, since people are increasingly choosing to consume news in-app on their mobile devices publishers should be looking to how best to monetise that way.

And despite the lower RPU of mobile users, it is demonstrably possible to make money on mobile…

«Facebook’s last earnings report was a blowout, with revenue growing 76 percent, and most of its advertising was delivered to smartphones and tablets. Almost all of this happens on Facebook’s own mobile app.»

Most of that increase has come from greater demand for click-to-download ads for other mobile apps. As we’ve seen from the amount of time people are spending in-app, that makes sense. As the web becomes more delineated and apps put up walls round their content, selling what amounts to passes into other walled gardens is a great opportunity for companies with the scale and reach of a social network or publisher.

So while traditonal display ad revenue could suffer as a result of the transition to mobile news consumption, publishers should note that the nature of apps allows for other sources of monetisation.

«For one, mobile video is still seriously undervalued. It’s a much better experience than video anywhere else. It’s an undistributed experience: it’s full-screen, there are no ad-blockers and a lot of people have smartphones with really decent screens. Over the last quarter, we’ve seen a lot more interest in the mobile side of our business, so CPMs are on the rise.»

There are challenges though for publishers looking to capitalise on that increased ubiquity of mobile, especially mobile video. YouTube is still the big name in the video game, although Facebook (and reportedly Twitter) are looking to steal some of that audience – and publishers have lately been concerned about the power those organisations have when it comes to publishing material.

So expect to see publishers making a huge push towards more valuable mobile video market during 2015, bolstered by more widespread availability of 4G networks and falling data prices, with 59 percent of people with 4G connections consuming mobile video once a week compared to 41 percent of those without.

Tablet sales have plateaued over the past year, and 2015 shows no sign of sales improving. That’s partly attributed to the emergence of the 6-inch plus screen smartphone, which looks set to become the standard as 2015 progresses. Wearables also look set to at least establish a foothold this year, with Google’s Glass, the Oculus Rift and Apple Watch all leading the charge.

But, as Jeff Jarvis has pointed out we’re all mobile now, since the ubiquity and interconnectivity of tech means we’re essentially always connected to the internet and whatever information we need. He argues this means publishers need to focus less on delivering content tailored to individual platforms and more on the context (location, time etc.) of its audience at a given time.

This presentation by Benedict Evans provides excellent background on how radically the paradigm has shifted:

And though platforms like Facebook have demonstrated it is possible to monetise mobile users, news publishers don’t have quite the same advantage when it comes to time spent in apps.

Overall publishers can be buoyed by the fact that as millions more people enter the smartphone market, their global reach – and the potential market – is growing all the time. Working out how make the most of that audience is the big challenge for 2015. 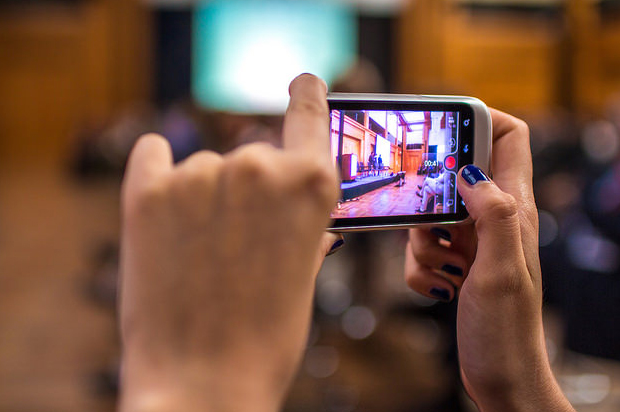