Seven internet trends you need to be aware of

Mary Meeker’s annual internet trends presentation is a must read for anyone wanting to understand the potential impact of the latest technological developments.

Produced by the venture capital firm Kleiner Perkins Caufield & Byers (KPCB), the 2015 edition is a mammoth 197 slides; with the deck covering a broad range of topics, from take-up through to innovation and market financials.

At TheMediaBriefing we’ve poured over the full deck so that you don’t have to. Here are seven key trends you need to be aware of:
1. Nearly 40% of the global population is now online.

Although global growth is slowing, especially in more mature online markets; such as Japan, (where the user base is flat) and the US (+2%).

In contrast, India saw its internet universe grow by 33% and China by 7%. In China 23% of the population is now online, amounting to more users than across all of Europe.

More widely, the transformative impact of the internet in the past two decades is reflected in its growth from 35 million users in 1995 to 28.8 billion today.

Meanwhile, in the mobile space, 73% of the planet now has a mobile.

Smartphones now account for 40% of the global mobile market, with 2.1billion users. Of internet users across the planet, 76% have a smartphone, reinforcing why mobile is increasingly the pre-eminent device for online activity.

Emerging markets are again seeing the fastest growth in mobile, with India once more leading the way. In the past year, smartphone subscriptions on the sub-continent were up 55%. They also grew +28% in Brazil and 21% in China. Mature smartphone markets also saw growth in subscriptions, although the adoption curve has begun to level off. Subscriber numbers were up +5 in Japan and +9% in the USA.

2. 51% of daily digital media consumption in the USA is on mobile.

But advertising spent has yet to catch up with this development.

Instead, print continues to punch well above its weight in relation to the amount of media time users spend with it. The same is also true, albeit to a lesser extent, of TV.

Meeker cites a tweet from the Box CEO Aaron Levie to show how software is transforming the way we work.

She goes on to highlight examples such as Slack, Square, Stripe, the data platform Domo and the e-signature tool DocuSign as potentially game-changing applications.
4. Messaging Apps continue to grow fast, with many of them evolving into multi-purpose platforms.

The growth across many of the leading messaging platforms in the past year continues to be exponential, with users typically deploying different platforms for particular communication needs.

For an indication of how these platforms might develop, it’s worth looking at popular Asian-originating services like Line, WeChat and KakaoTalk; which include payment services, voices calls and wider eCommerce opportunities, alongside pure messaging applications. It will be interesting to see if western created services – like Facebook Messenger, Snapchat and WhatsApp – follow suit.

Interestingly, Meeker suggests that for many new internet users messaging platforms may be their first foray into the online world (in the way that social networks were not that long ago).

6. Not surprisingly, millennials are leading this charge.

Internet users aged 12-24 are often at the forefront of many of these changes in consumer behaviours. They’re active social networks, love their smartphones and regularly use the camera and/or video function on their phone.

These elements are gradually aligning as their social networking activity increasingly gravitates towards more visual networks like Instagram, Snapchat and Vine.

In the past year, US teens have used Facebook, Twitter, Tumblr and Google + less than they did a year ago, although Facebook continues to be the most used single social network amongst this cohort.

7. eCommerce is undergoing a rapid evolution across the globe

Platforms and services are becoming increasingly service orientated, offering what Meeker refers to as “just in time” products and services allowing for instant booking or rapid delivery. This is helping to transform the traditional retail experience.

In the US, eCommerce activity now accounts for $300 billion of annual activity, akin to 9% of retail sales. This is up from c.1% at the start of the millennium.

Not surprisingly, many of the innovations in this space are focused on in areas which see some of the highest levels of consumer spending; such as housing, transportation and food.

Many of these innovation platforms – like eBay, Uber and Airbnb – are creating a new breed of workers as traditional providers are disrupted, often resulting in clashes with regulatory authorities and legacy suppliers. 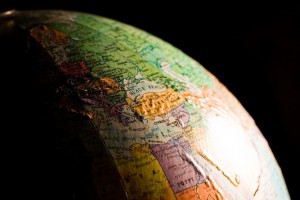 (Project 365 Day 356)
I have an old globe that still lists East and West Germany, the USSR, and Yugoslavia.