A new study from the Pew Research Center and Knight Foundation finds that more Americans of all ages, races, genders, education levels, and incomes are using Twitter and Facebook to consume news.
Facebook and Twitter users across all demographics are increasingly using the social networks as news sources, though they are seeking out different types of news content on each platform, according to a study out Tuesday from the Pew Research Center and the Knight Foundation.

Sixty-three percent of both Facebook and Twitter users said they get news on the social networks, Pew found. That’s an increase from 52 percent of Twitter users and 47 percent of Facebook users who told Pew in 2013 that they use each platform to consume news.

“As social networking sites recognize and adapt to their role in the news environment, each will offer unique features. These different ways of connecting with news have implications for how Americans learn about the world and their communities, and for how they take part in the democratic process,” Amy Mitchell, Pew’s director of journalism research said in a statement.

facebook-slippers-cc
RELATED ARTICLE
Facebook’s Instant Articles are live: Either a shrewd mobile move by publishers — or feeding the Borg
May 13, 2015
Twitter, with its unfiltered feed, is reportedly trying to take advantage of its strengths as a breaking news platform by developing Project Lightning, an attempt to curate the Twitter experience. Earlier this year, Facebook, in partnership with nine global news organizations, debuted Instant Articles, a streamlined reading experience on its iOS app.

While the percentage of users receiving news from Facebook and Twitter has increased, the total percentage of Americans using the social networks has remained steady.

The growth in social media news consumption is consistent across all demographics, regardless of gender, age, race, education level, or household income.

Though more people are getting their news from the social sites, most Americans still see Facebook and Twitter as secondary news sources, the study found. Sixty percent of both Twitter and Facebook users said that the sites were “not a very important way” they get their news. About half of younger users between the ages of 18 and 34, however, said that the sites were “the most important” or “an important” way they get news. Comparatively, 34 percent of Facebook users over 35 and 31 percent of Twitter users over 35 said the platforms are among the most important ways they get news.

While politics reign supreme on Facebook, Twitter users are more likely to directly follow news organizations or reporters. Pew and Knight asked users who get news on Facebook and Twitter about 11 different news topics, and 67 percent of Twitter users said they saw at least six of the topics that were asked about. Fifty-seven percent of Facebook users said they saw at least six topics.

“The sizeable increase in news consumption on Twitter and Facebook since 2013 corresponds with new initiatives and features both platforms have introduced to promote access and engagement with media content,” Jon Sotsky, Knight Foundation’s director for strategy and assessment, said in a release. (Disclosure: Knight is also a funder of Nieman Lab.)

“Exploring how news consumption through social media can shape how people interact with, respond, and react to the news will be critical for news providers and others interested in advancing the real-world impact of journalism.” 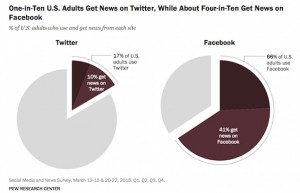