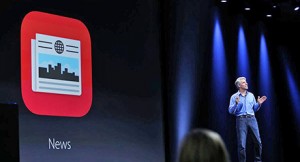 You can probably imagine the flurry of excitement in the creative tech industry this past week, hotly anticipating Apple’s keynote at its Worldwide Developers Conference (WWDC) in San Francisco. Apple TVs in boardrooms everywhere — including ours — streamed it live.

WWDC turned out to be especially relevant to publishers — not least of all because Newsstand (launched to lots of fanfare in iOS 5 but languishing in popularity since then) got the axe.

Consider it a welcome act of quietly putting an app past its prime out to pasture. While it once had earnest intentions of making mobile media consumption easy for iPhone users, the app ultimately hide publications away once downloaded. Worse, it locked publishers into a no-win scenario where moving the app out of the faux folder meant losing your in-app subscription base and starting from scratch.

Newsstand to pull a disappearing act, replaced by News

Expect Newsstand to morph into a regular folder, and for its apps to now appear as static iOS icons in that folder (rather than custom issue-covers) that users can re-order like their other apps.

This is excellent for previous Newsstand subscription publications, who will retain the perks from having been part of Newsstand to begin with, but who can now have front-facing billing on the home screen grid should the user decide to place them there.

Exit Newsstand, enter News — a new, smart iOS 9 app similar to Flipboard that will pull and stream news articles and channels from online magazines to newspapers to blogs and beyond. From Apple’s vice president of product marketing Susan Prescott while demostrating the new app during the keynote: “The best stories from the sources you love, selected just for you. The more you read, the more personalised your news becomes.”

From the demo, swiping gets you to the next article, which also might be from an altogether different publication. And this is the crux. Publishers shouldn’t view News as the be-all end-all mobile delivery solution, least of all because their content will appear in a feed alongside countless others, meaning their own branded and/or premium experience will still be better served through a native app experience.

It’s unclear how the smart app will learn its user’s preferences to curate content. But Prescott touched on Apple’s considerable computational clout in having already organised up to a million searchable topics through machine-learning algorithms.

In the meantime, its big mobile media partners like Condé Nast, The Economist, and The New York Times will be among the first curated into the publication stream as the initial rollout reaches the United States, United Kingdom, and Australia with iOS 9 later this year (and the public beta next month).

Being in from the get-go will be great for discovery, but it’s likely to get crowded quickly as the sign-up and distribution process is the same for everyone, whether corporate entity or self-published self starter — and it’s free.

According to Apple’s News Publisher’s Guide, any publisher will be able to use its RSS guidelines to deliver content until the new format is available. Details aren’t available as yet on what exactly that format will be, but Apple will support integration with third-party content management systems to pull content.

Most importantly, monetisation will be possible (either self-sold, through Apple, or a combination of both) via Apple’s ad-serving platform, iAd. Publishers will be entitled to 100% of ad revenue through self-sold ads in articles or channels. They’ll also be able to earn from ads sold by iAd that appear in Apple-curated topic feeds — so you can add another monetisation lever to your mobile toolkit. Meanwhile, Apple will earn 30% in revenue share from ads it sells for publishers.

To kick off the process for publishers, Apple has set up an iCloud-based hub called News Publisher, where it’s possible to sign-up, add feeds, and manage channels, members, and account profiles.

Hopefully — with publishers taking the lion’s share of ad revenue and RSS streaming guidelines already outlined — the first iteration of News will be an easy win for publishers to augment their mobile strategies, especially as a lure to engage with their current apps by increasing brand visibility and reach through popular content. We’re eager to get started on the platform, measure engagement, and uncover deeper and more meaningful integration opportunities.